From the Capitol Fax Blog (One of my Sons) 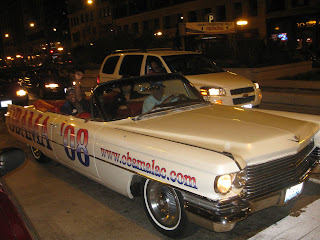 Ed Scanlan from Chicago sent this pic in.

The following is from my oldest son's blog:

I’m still trying to absorb all of this. There are so many things to contemplate, many of them personal. The fact that I’ve known him for years, even since before he was elected to the Illinois Senate. The private conversation we had long ago when I tried to discourage him from running for the US Senate. Our chance meeting on a public golf course when my then girlfriend swooned and I told her she was nuts. His remarkable primary victory and the whacky season it sparked (Blair, Jack and the Martian). My chuckling at his nickname for my formerly staunch Goldwater Republican and formerly all too white father: “Brother Miller.” My embarrassment at my father’s first words to Obama when I introduced them in January of 2004: “Never change. Never change,” and my concern at how Barack will, eventually change. His call to me during his failed congressional bid wondering why I was being so harsh and his attempt at rapproachment, when I first realized how skillful he could be. The fact that my wife is an Iraqi-American and my concern about what this election will mean for her family and her former nation. On and on. It’s kinda weird “knowing” a president-elect. It makes you think back, as well as look forward.
Posted by Obamalac at 8:59 AM