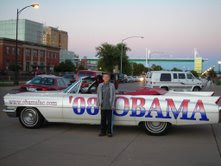 I hope Phillip Tunnicliff was inspired by what the Senator had to say about the war in Iraq. He was in the crowd of people on the banks of the Mississippi to listen to Obama's words on Iraq. Back in 2002 I took my grandson, who was about Phillip's age then, to see and listen to people speaking against war with Iraq. It was an event along the 100 block of North Michigan Avenue, downtown Chicago. I didn't know until much later that Senator Obama was speaking against war with Iraq just a block away from our location that day!
Posted by Obamalac at 8:27 PM