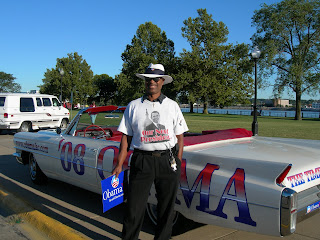 The next President returned to Davenport, Iowa to give a speech on Iraq and conduct a town hall meeting. He was warmly received by many people and a few trains tooted their support as they rolled by! Jim Kerr, pictured with the Obamalac, has been a supporter of the Senator ever since he first announced his intention to run for the senate. Jim and I worked the precints in Rock Island, IL when the primaries started back in 2004. Jim is an elected official (Democrat) in Rock Island and also is a very good golfer! Picture taken near the LeClaire Park bandshell along the Mississippi 12 Sep 2007 while waiting for Obama to arrive.
Posted by Obamalac at 10:14 PM