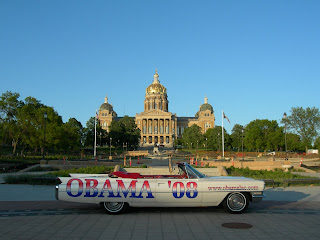 We have won an absolute majority of all the delegates chosen by the people in this Democratic primary process as of today! No imaginary counting, nor wishful thinking, just total numbers won by the rules. This country will not have a third Bush-Boy term so the next president will soon be Sen Barack Obama! The Obamalac is parked near the Iowa Capitol Building today overlooking the gathering crowd of people here to listen to Sen Obama talk about another victory in the primary process of 2008.
Posted by Obamalac at 2:33 AM