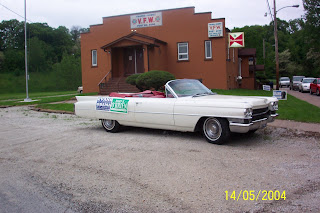 A campaign stop by Barack Obama at the VFW in East Moline, IL in May, 2004, turned out to be an event we would all come to know about.
This small place was the forum that introduced Barack Obama to a handful of people, one of whom was a young Marine, Seamus P. Ahern. Later, we would all hear about the fateful meeting when Obama included the meeting in his electrifiying Keynote speech at the Democratic National Convention.
The picture shows the Caddy parked in front of the VFW that day. The Obamalac was a thing in the future. The Caddy was carrying signs for Barack Obama for U. S. Senate, Lane Evans for Congress, and Mary Kay O'Brien for judge. All three easily won their primary race.
Posted by Obamalac at 3:51 PM